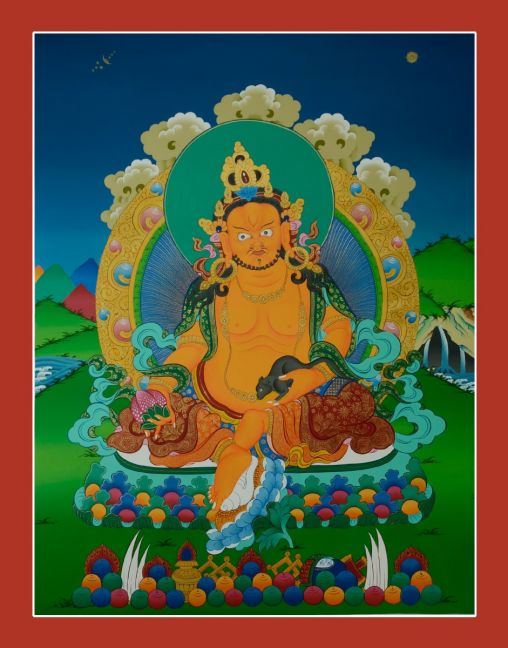 Jambhala is a wealth deity whose blessings remove the obstacle of poverty, bringing wealth and abundance to pure Dharma practitioners. As it is difficult to attain spiritual realizations while afflicted by lack of resources, Jambhala generates prosperity so that practitioners have the time, energy, and means to accomplish. According to the Sutras, while Shakyamuni Buddha was teaching one day, demons tried to disturb and confuse the Buddha. Jambhala appeared in front of the Buddha and protected him. Recognizing Jambhala's courageous action, the Buddha asked Jambhala if he would like to become a Dharma Protector in order to help all sentient beings. Jambhala accepted the Buddha's offer, and since then he has offered immediate assistance to all who call his name or chant his mantra. His blessings bestow good luck, increase virtues, prolong life, increase intelligence, and provide both material and spiritual benefits.

There are five Jambhalas - yellow, white, black, green and red - of which yellow is the most common form. Each form has its own special significance and attributes. Yellow Jambhala is depicted adorned with a crown, silk garments, and beautiful gold and jeweled ornaments. He is seated imperially upon a throne, with a bijapuraka (citron) fruit in his right hand and a mongoose in his left hand. The mongoose constantly spews forth precious jewels and treasures, and represents Jambhala's victory over the nagas.